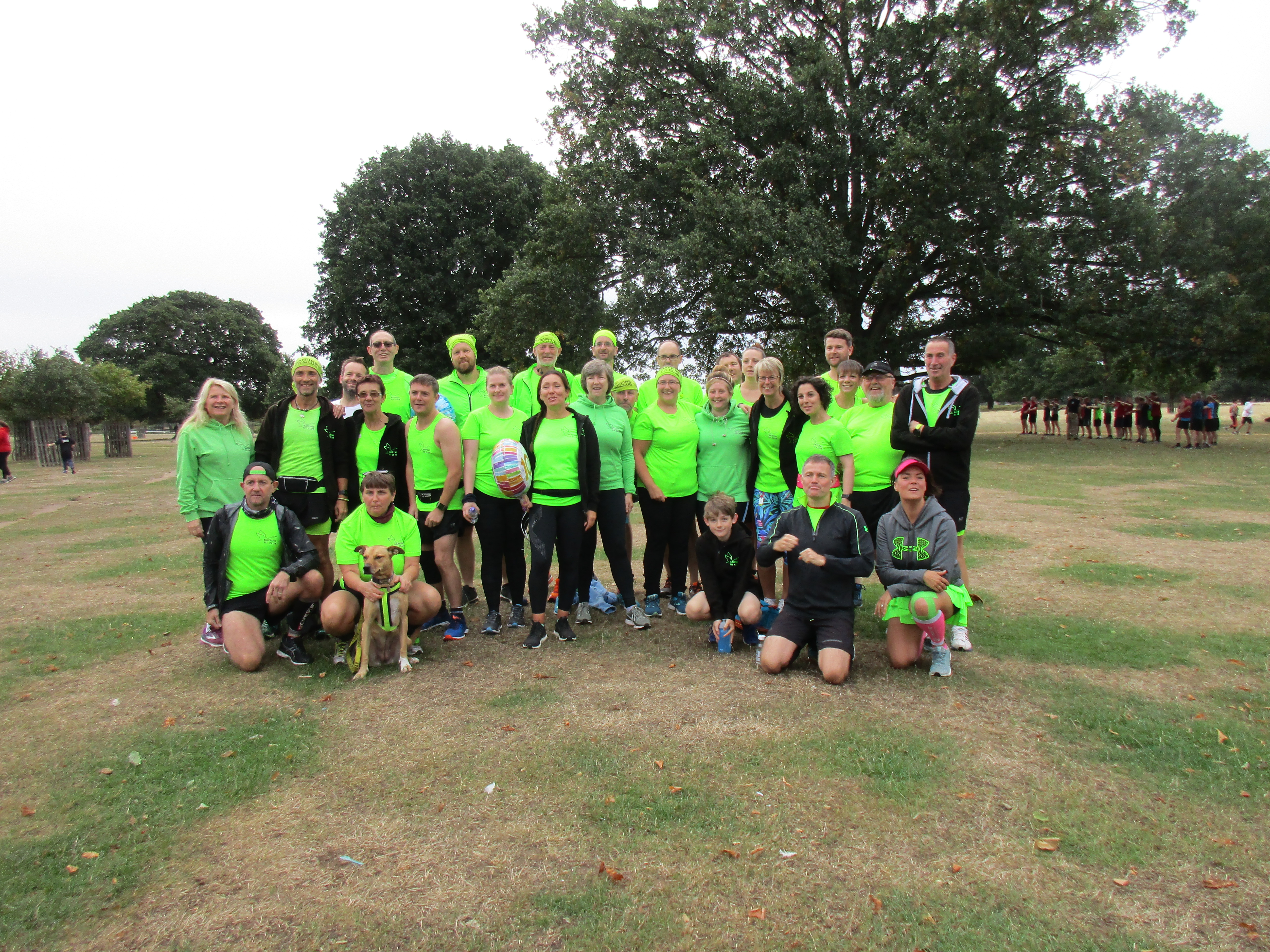 Well where do we start ?

It is with great pleasure that the Governor's have let me loose to write a weekly Blog for our ever growing club. Not sure if they have any idea what they have let them or the club in for but I promise to behave, well most of the time.

So I am currently sitting at home and have finally dried out from the run at Stanstead this morning were we have introduced some members of BFC into Trails but more of that later , first and foremost Bushy Park.

If you asked me to sum Bushy up in one word it would have to be IMMENSE simply wow what a place.

So some time ago it was decided that Helen Mayhead (100 parkruns) and Paul Norris (50 parkruns) wanted to do something a bit different so a Road Trip to Bushy was born in all fairness it was very well organised with car shares as we where told parking would be limited.

We knew this was going to be an early start and arranged for everyone to meet at Doggers for 7am, however with my special skills in navigation and time delivery I recommended leaving at 6:45am due to expected traffic conditions so we got there in good time and so we did about an hour early oppps my bad guys but we got there in time to use the loo and get some photos.

Once we actually found the Park which to be fair wasn't exactly well signed we drove in the main entrance and on the left and right there was deer after deer grazing with the occasional Stag.

What an amazing place who would have thought that in London you would find such a beautiful place it was simply stunning. Not really sure what we were expecting to find at Bushy but as soon as we got there I smiled broadly knowing I had to run well today because I owed it to such a great parkrun venue and I'm sure everyone of the Baffinaters that attended Bushy felt the same.

We parked up and waited for the others to arrive by 8:15 we were pretty much all there and what a motley crew turnout it was. We got some photo's and it was pretty obvious that Helen and Paul were both delighted with the venue and the BFC turnout to help them celebrate there milestone parkruns.

The first challenge of the day was trying to get to the toilets using the pathway may I add without getting run over by a group (100 approx) Military Training Fitness classes ok I get the fact they where training and pretty hard but I swear when they saw Green it meant charge them down there's me thinking the Deers and Stags could be dangerous not a bunch of crazed fitness fanatics running around like headless Duracell Bunnies.

Anyway we escaped unscathed and met back up with the 30 or so BFC crew who was greeted by one of the Race Directors and his wife who where very charming and made us feel very welcome.

We where waiting to get a group photo and was wondering where Terri Ann Brown had gone to she was found eventually, apparently Colin Southwell had locked her in the car by mistake which made a few of us chuckle.

So the Race Director was explaining about the course and that we needed to pay attention to the deers and stags at the park as it was mating season and some of them are known to get a bit frisky? that was probably the best bit of advice for PB motivation, me for one didn't feel like being mounted in any shape or form so if that meant run faster I was making sure I kept something in the bank in case of an emergency.

So we headed over to where the start line was and heard a call for any first timers for the safety brief, they asked if it was anyone's first time so yours truly shouted out "ME!!" everyone started clapping what they asked was anyone's very first parkrun. Luckily I was surrounded by Greenies so quietly slipped to the very back of the safety briefing to hide my embarrassment.So of to the start we went if you can imagine Southsea Parkrun and then times that by 4 that would be roughly the volume of people there was over 1,200 runners to be honest it was great to see. The starting line stretched for about 100 meters.

So feeling brave myself and Brett Rumfitt positioned ourselves at the very front so I knew I had to be quick out the blocks, so we where off Brett took off like a man being chased down by some sexually starved Stag he was gone I tried my best to keep up which for about half a K I was there or there about's but simply to quick for me.

Funny how everyone was saying at the start "I'm just going to take it easy and enjoy the run" yeah right you where apart from our Helen who nearly chopped her toe off !

Dan Walton soon caught me up and kept me company for the first 3k which was great as we where running around 4:15 for a K which was not to shabby, I took a quick glance at my watch and started thinking about the possibility of a PB ,dare I ??

Dan pushed on and if I had really dug deep I could have kept the pace but in the back of my mind I was thinking that I needed to keep something back just in case I was terrorised by some wild animal.

So pretty much as normal I knew Jason Smith at 3k could not be that far behind me and would have me in his sights gradually closiing the gap. I knew that if he passed me he would open his stride and I would struggle to keep pace so after a quick glance over my shoulder I decided to push it a bit more good job I did as afterwards he mentioned that he was so close to catching me then I kept speeding off.

The course was amazing surrounded by beautiful scenery and wild animals for those of you that didn't make Bushy at some point it is a must do parkrun.

Anyway so I finished greeted by Dan and Brett who had both run amazing (the gits) I thanked Dan for abandoning me at 3k and leaving me on my own and at the mercy of the wild life.

I never thought a few weeks ago I would get close again to my PB 22:16 that I set at Southsea back in Easter this year and to be honest I had started smoking again, I know sillly me but that had really affected my times and I was running around 25's which was nearly 3 minutes slower then I was capable off. So I made the sensible decision to quit about a month ago and I am some chuffed I did. The boy done well, I only went and got a PB 22:15 so I achieved a PB by one second I was chuffed to bits I know they say you should chip away at your times, but really one second.

So we waited for the guys to come through the funnel system I will say very very well organised the funnel was about 300 meters splitting into a left and right lane very impressive.

Everyone and I mean everyone came in with broad smiles a glint in the eye and stood proud among the other parkrunners it was a great day to be wearing my greens with pride as you looked across the finishers and kept seeing green after green.

Bushy Park was special it gave you that little bit extra when you would normally start feeling the pace for me I fell in love with the place and for me to PB like so many others that ran at Bushy made it extra special.

Would I go back? Hell Yeah ! and for those who have not been you need to when I get to my 99 I'm heading there for my 100th.

I asked Helen and Paul how did they find it, they absolutely loved every moment what a perfect venue to celebrate milestones. In fact if you asked anyone who went to Bushy from the club they would say they where buzzing energised proud and happy. Happy that on a Saturday morning at 6:45 they left doggers drove to London and ran in the very first Parkrun venue in the world. Was it worth it ? stupid question that. It was a morning running with in my opinion the best club ever with some of the coolest people I have had the pleasure to meet. 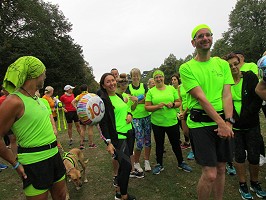 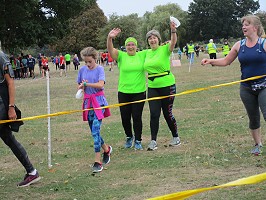 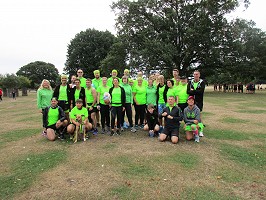 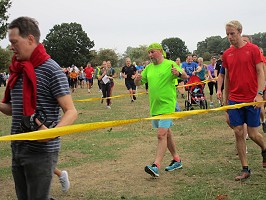 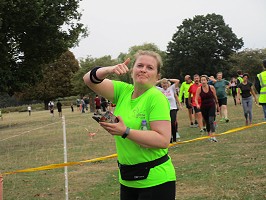 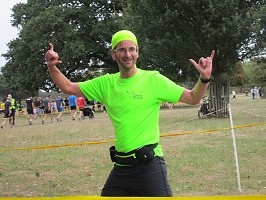 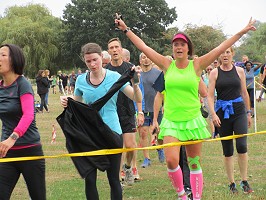