The Berlin Marathon by Mike Daniels 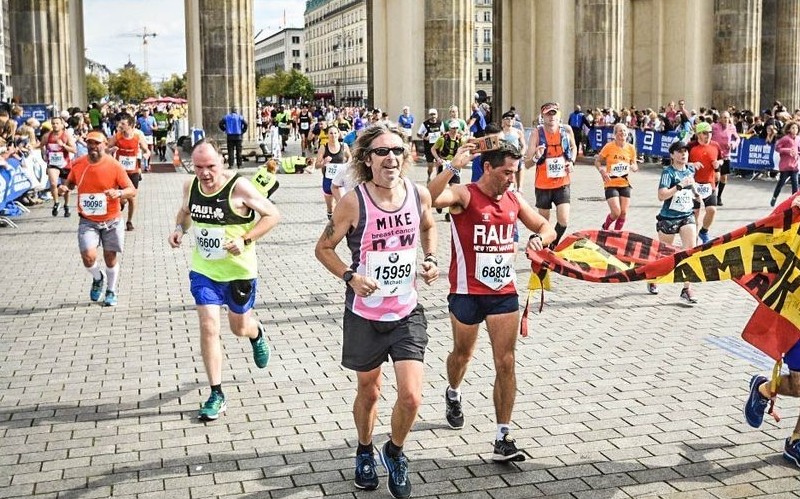 After weeks of nerves and days of waiting, marathon day was finally there. I’d eaten my spaghetti Bolognese the night before as prescribed by all runners and downed a large bowl of porridge on the morning of the run. I’d trained for the last 16 weeks - missing a couple of weeks here and there due to run related injuries. I felt as ready as I would ever be. Let’s go!

I arrived at Friedrich Strasse station just after 8am and got off the train with dozens of other runners all ready for the day. We walked down the road and turned on to Unter den Linden and the Brandenburg gate was in sight at the end. More and more runners joined us as we walked down and past the gate to the area in front of the Reichstag where the entrance to the bag drop and runners’ groups were.

I found ‘Group E’ and went inside. Wave one was groups A to D, wave 2 was E and F and wave 3 everyone else. I had said that I was hoping to achieve a sub 4hr run so I had been placed in the group looking to run 3:30. Having never run further than 20 miles in one go, I was a little nervous!

There were people warming up, running up and down inside the pen and outside along the edge of the road.

I stood and watched the big screen where the elites were about to set off. Eliud Kipchoge was the first to go - he was looking to set a world record. He literally sprinted off along the road towards the angel (or Siegessäule to give the monument in the middle of Tier Garten it’s official name). He was followed by the rest of the elites, then the recumbent cyclists and wheelchair entrants.

Finally, the first wave of runners set off. We were moved forward and had 10 minutes to wait. Everyone moved closer together and the excitement began to intensify. At last, after months of training, nerves and carb loading we were off!

I ran off far too fast into the morning sunlight. It was about 15 degrees at that point and I still felt fresh. I spotted Kirsty, my girlfriend standing by the barriers and gave her a wave as I passed.

The first 10 miles went by so quickly, I hadn’t really noticed I was running. I saw loads of people cheering us on, shouting out to those they recognised and those that they didn’t. ‘Du schaffst es’, ‘lauf weiter’ and other words of encouragement. As I had my name emblazoned on my vest, I often heard people cheer me on personally. That and seeing the city that I had spent over a decade living in during the 90’s from a completely new perspective, kept me so entertained that I barely realised what I was doing.

We ran through Moabit and into the east of Berlin. Back up the other side of the river and through into Mitte past all the old landmarks, Reichstag on the right again, Friedrichstadt Palast. Everywhere people were lining the streets and cheering us on, the younger ones with hands out for ‘high fives’ - it was a great feeling.

Around the halfway mark, it started to get a little warmer. The half way point was about 2km from the start/end if you took the shortest route. Kirsty had arrived there just before me as she had been tracking my progress on the app, I waved as I ran past. Half way now.

One of the things I will never forget was the sound of thousands of plastic cups being crushed underfoot as runners grabbed water and dropped the half full cups on the ground. They were clearly one-use only and very brittle.​

We carried on through West Berlin and the crowds were offering refreshments too, some of them even offered cups of beer. I was tempted but thought I’d wait til the end, so I could enjoy it more.

I was now in new running territory. The furthest I had run was 20 miles and I had just gone past that milestone. I kept saying to myself ‘I’ve only got six miles to go, I’ve done that before…’ and distracting myself by giving kids ‘high fives’ as I ran past them.

We ran down the Kudam, heading back towards the centre of town, over Potsdamer Platz. Wow, that area has changed loads. I didn’t recognise much of it. Then back through the old streets of Mitte, just up from Checkpoint Charlie.

I spotted an old friend playing drums with her band. I ran over for a quick hug and continued on, about a mile to go now. The streets were quieter here as most people had gathered towards the end.

As I rounded the corner back onto Unter den Linden, I could hear lots more music, shouting and cheering. Up in the distance I could see the Brandenburg Gate and the finish. I still had some energy left and put on a last sprint to get through the gate.

As I arrived I discovered that there was still about 100 metres to go! I kept going and as I neared the line, I saw the clock and compared it to my watch as I crossed the line. It confirmed my time. I still can’t believe I did it in 3:45 and some seconds.

As I slowed down to a walk, I felt my legs start to stiffen up. I walked over to the people handing out the all-important medals and was also handed a plastic sheet to keep myself from cooling down too quickly.

Bending down to take the timing chip off my shoe was nearly impossible at this stage, cramps attacking me every time I tried. I walked a bit more and stretched carefully then managed to get my shoe off and the timing chip. As I made my way out of the enclosure, I felt so elated to have finished and with a time I could never have imagined.