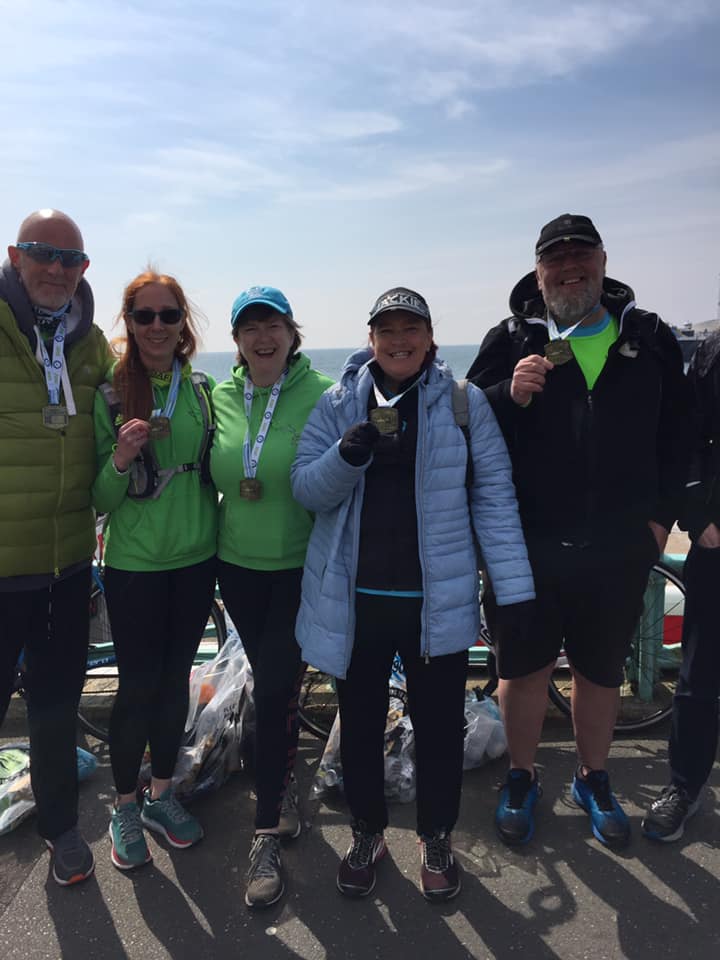 Oh I do like to be beside the seaside…

Even the best of meals is improved by a tempting hors d’oeuvres and at Brighton we delivered that with seven Baffins runners in the 10k, which immediately preceded the marathon. Three K’s - Keith Caunt, Kevin Friery and Kelvin Howard were joined by Laura Burns, Billy Bilton, Janet Sampson and Jackie Goddard for the opening event.

I’m not going to write about individual times, even though they were all excellent, because the key element was the participation. - there are many runners in the club who run shorter distances and at slower speeds than this and we celebrate all of them.

As part of a massive representation by Baffins Fit Club, our 10k runners were up and ready well before the 9am start. I was caught up in the rail cancellation/replacement bus service/general horror story that is Southern Railways so I left the house at 4:30 to get to Angmering to catch a train that was in fact a bus which stopped at every station between there and Brighton and pulled into the city at 6:50am!! (Note for the future: Book the Park & Ride). My walk up to Preston Park (where all the events started) was scheduled to take 30 minutes according to Google Maps but in fact it took just under 10, so I arrived very early - probably the first runner in the arena - and settled down with a cup of coffee to wait for everyone to arrive. The sun was already up and a fresh easterly breeze was making sure the morning temperature stayed close to zero degrees. The arena looked well laid out and organised, and within half an hour it began filling up with runners, spectators and volunteers. I couldn’t help noticing that a small handful of runners had lanyards with “Invited Athlete” on them - it was noticeable that they seemed quite solitary and didn’t seem to belong to any groups of friends or supporters. The Baffins Crew, on the other hand, started to arrive now and quickly coalesced into a large supportive, friendly gathering, adding evidence to our reputation as the friendliest club in the area.

By 8:40 all our bags had to be left with the baggage drop crew (more about them later) and we moved into our starting corrals - for the 10k there were just 2, red for those aiming for a sub-60 minute finish and blue for those who were going to take longer. We had three Red runners (Kelvin, Laura and Keith) and four of us in the Blue cohort. At 9am the race started, and it took several minutes for those at the back to finally cross the starting line but because we had chip timing this didn’t matter.

For those who aren’t familiar with race timing, there are two ways a race can be timed. Gun timing means there is a single starting gun and everyone is timed against that. Chip timing means each runner has a chip embedded in their race number on their chest or else tagged onto their shoe, and you are timed as your chip goes over the start and finish line. In Brighton, therefore, we all had a Gun Time and a Chip Time, the latter accurately recording how long we each took. As a contrast, for example, parkrun uses gun time only and everyone has the same starting time even though it can take 40 seconds for those at the rear to cross the starting line.

The race itself took us on a meandering course down into town (a lovely 2 kilometre downhill start) then back up the hill again and around some of Brighton’s streets before descending again past the Pavillion to the seafront. At the seafront we turned right and continued out towards Hove until we turned to head back for a finishing 2.5 kilometres to Brighton, finally passing Brighton Palace Pier with a 500 metre push to the finish line. The streets were lined with cheering supporters and it certainly helped to keep us going when energy was flagging. On that final out-and-back along the seafront we could see each other as we passed in opposite directions and gave encouraging waves. A HUGE thank you to Gemma Hoare who managed to occupy a strategic spot on the central reservation and cheer each of us loudly in both directions - a little green oasis in a multi-coloured crowd.

As we finished we were each presented with our medals and some High5 energy bars and soluble tablets along with a filled water bottle and a foil protective blanket and then we joined the queue to reclaim our bags. Oh that queue!! It seemed to take longer than the race itself! The organisers sent us an apologetic email but it was pretty tricky out there - it was cold and we were largely static and couldn’t access post-race nutrition or drinks. It turned out that some local youths had moved all the direction signs overnight so that the lorries with our bags had gone the wrong way and got hopelessly lost, meaning they only arrived about an hour and a half after the race had started. I was too cold to even look at my watch because I was clinging the foil blanket around myself, but I reckon I queued the best part of half an hour.

Once the bags were retrieved, and the goody bag collected (I did wonder at the half a dozen hair masks I received!), it was round to the event village and a chance to catch up with everyone and get some food and drink. We exchanged stories of fun and endurance, of mutual support and best times - Laura told us that Kelvin had even run back against the flow of runners to make sure he stayed with her and encouraged her to push on - and gradually we met more and more Baffins people.

As we left the village the first of the Marathon runners were nearing the finish line and we managed to see the men’s winner in full beast mode heading to the line looking strong and determined after over 26 miles of incredible running at little over 5 minute per mile pace.

The day was great, the company wonderful, the Baffins support as warm as ever and it was heartening to know we had put on a good show to set the scene for the heroics that followed with the marathon runners.

Oh, and I signed up for the marathon next year (my first ever, a month before my 68th birthday). That’s how good it was. 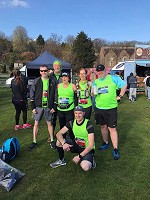 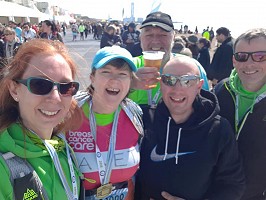