This year’s Malta trip was the third for some of us and the first or second for others. For those people though it was to be the first time they were able to run it due to the hurricane and storm, the like of which Malta had never seen, that just happened to hit the island on Marathon Day 2019 which forced the cancellation. So, we all felt like we were owed some decent weather this year!
Of course things never go that smoothly and due to the coronavirus effect we learned the T shirts would not arrive in time. We had the choice of being refunded €5 each or arranging for them to be collected at a later date if we had a contact on the island. Lucky for BFC we have the lovely Suzanne who’s sister has very kindly agreed to do the honours. I need to give a mention to Joe the RD with whom we had amazing communication beforehand and arranged to have all the BFC race packs ready for collection as a group at Registration which saved loads of time.
So it was 7 of us that met at the unearthly hour of 3.30am on Friday for a taxi to the airport for a 7.30am flight. 4 of our party had decided to go a few days earlier. Breakfast at Wetherspoons (always a given) and we took off on time. We were all staying at the same hotel this year. It’s wonderful anyway but those who had been before were given upgraded rooms which was a nice touch. Dinner was at The Bus Stop Lounge in Silema which always deliver a decent, and very generous meal.
Those of us that had been before had learned a hard lesson that the day before race day is for taking it easy. Valletta is a lovely city but very hilly with lots of walking if you want to see it all and although a few of the party chose to visit we decided that a bus ride to a fishing village called Marsaxlokk would be an easier day. Correct decision. It was beautiful and we enjoyed coffee and cake on the waterfront and a little wander through the market before returning to Valletta on the bus. As the weather was so favourable a chilled afternoon by the outdoor pool back at the hotel was in order.
Race day dawned and it was fairly obvious from early on it was going to be an ‘uncomfortable’ run as the temperature was 18 (feeling like 20) as we started at 9.15am. The route winds out of Mdina and it’s quite a sight to see a colourful trail of runners snaking away in front of you. There seems to be a widely held belief that the Malta Marathon and half marathon is downhill. Do not be fooled. Although it is true that the course drops 200 metres from start to finish in no way is this a ‘downhill’ race. The first part is mostly traffic free. After about 6/7 miles runners hit the outskirts of Valetta. This is a fairly hard to run, relatively hilly section and only one lane was closed to traffic so we found it quite dusty and encountered traffic fumes. Then the last couple of miles is around the bay into Silema. Lovely views of old Valletta and the harbour but it was very hot by now and there was no shade to be had along this section. Those that hadn’t run the race before were lulled in to a false sense of the finish line being just around the corner. It isn’t! However the support here is great and it was so lovely to see the earlier BFC finishers cheering us in and waiting at the end with hugs. Along the course there are loads of water stations offering Powerade and electrolyte drinks as well as orange segments and 3 sponge stations. There are also bands, singers, DJ’s and the like at every mile which were awesome. All 9 runners having finished in one piece we reconvened for a well deserved ice cream and made our fairly slow, painful way back up the hill to the hotel. We had a birthday to celebrate (Ian) so the rest of Sunday was spent chilling by the pool again, re fuelling, mostly with chips (lol) and taking advantage of happy hour!
A special shout out needs to go to our 2 amazing support crew Carl and Chris who stood out in the sun until every one of us had crossed the line. On a personal note I’d like to thank Laura, who stuck to me like glue telling me when I needed to run, when it was ok to walk, how far we had been and even reminded me to breathe when I seemed to have lost the ability to think for myself!
Our group this year were
Ali & Colin (course PB) Southwell, Laura Burns, Carl Watson, Claire Gasson, Lisa (PB) & Steve Cross, Chris and Tina (PB) Matthews, Ian Briscoe & Martyn Threader
I feel pretty sure this is now an annual event in the BFC calendar. Who’s up for next year? 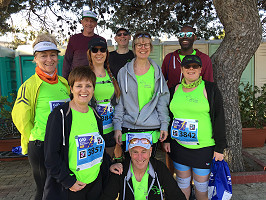